December 26, 2012 came and went, the original first due date. Sometimes it’s hard to really know whether the due dates given by doctors are the actual due dates or if the baby and God have a totally different plan. In the birth of Cohen, he and God definitely had a different plan; a plan that would prove to be the best, most divine plan of all.

Most of my pregnancy with Cohen was quite the adventure. I was put on bed rest and feet up more times than I care to recall and it seems even in the womb he was being formed with incredible intention and purpose not to be messed with by man. At every turn I submitted to the wisdom given but to say it was easy would be an understatement. I have two other beautiful babes that need their mama and oh how gracious they have been during this very long season of mommy not being able to jump and do for them all the things they have grown accustomed to. To say they were team players would be the understatement of the century. They went above and beyond the call of duty and that goes for their magnificent daddy too. He was burning the oil at both ends and never once, even to this day, have I heard him complain.

The news of my pregnancy was long awaited, most exciting news. Jared and I had prayed and asked the Lord for a son for over seven years to carry on the Adam’s name, to fill our home with even more joy and laughter. The fruit of the womb is God’s reward! I delight to know He would entrust me with this gift of all gifts.

I spent the first trimester sick with a virus and no voice. Funny how when God is trying to get a point across He will allow any measure to grab our attention. In this situation He was saying, Be Still and Know that I AM GOD! Those of you who know me surely know being still is a practiced behavior that I haven’t had a lot of practice at until now. Then the second trimester brought a subchorionic hematoma that had to be monitored weekly until it resolved. I can honestly say throughout the entire pregnancy there was a grace that ensued and God carried the baby and I through it all. I gained an amazing 67 pounds and every pound of that felt amazing. Sure I had my days of feeling like a hippo wondering how I would continue to make it up and down the stairs but nonetheless, I did, we did.

It was the week of January 14, 2013 and i had been awakened with the sense of needing to contact a dear friend of mine, Melissa Eikenberry, whom I had walked through Counseling training with. It had been a while since we had actually seen each other but did our best to stay in touch now and again. I had asked her to pray and tell me if she was hearing anything from the Lord in regards to the arrival of our son. It was barely five minutes later and she responded with a clear message to “sing him out”. Well interestingly enough Jared and I had sensed something similar that very morning and God was using this relationship to bring confirmation to what was in our hearts. That evening at about 10 o clock, Jared grabbed his guitar and for the next hour he sang songs in the spirit that had never been written here on earth. Songs so powerful both he and I were in tears as we felt the tangible presence of the Lord in the room. I began to feel gentle movements and rhythms in my womb and fell asleep with such peace knowing God was surely in this place.
1:10am: I wake to use the restroom and shortly after fall fast asleep. 1:30am: I wake with a funny cramping feeling in my belly thinking surely I was dreaming. I fall back asleep. 2:30am: I wake with the same cramping feeling only more intense, I drop to the floor and begin intense breathing. I rise to get back in bed and drop to the floor again, soon realizing this was GO time. In between contractions I pat Jared on the arm and say, “this is it, he’s coming his own way, his own time”. The next hour becomes a quick blur and as I continue to stop, drop and breathe, Jared tries to gather our things to the car. Thank God the Eichenbergs are quick responders, they were here to watch the girls in record timing. Jared made a call to our midwife and after she listened to me breath over the phone she said if you plan to get to Spectrum you better call an ambulance cuz he’s coming fast. It was then we decided staying local was the better idea.

Thank God Doran was a fast driver and fully believed in running any and all red lights because we almost delivered on the side of the road. As I had my face pressed up against the cold window, breathing on hands and knees in the back seat, I began to plead with Jared to phone ahead to get the epidural ready cuz’ surely no one could live through pain like this. Any woman claiming to have surely wasn’t telling the whole story. ☺

We arrive at the ER just in time for me to fall out of the car, lose my shoes on the way in and hit the ground just through the sliding doors of which continued to open and close through the next three contractions. I am on all fours needing to push and the sweet security guy is ranting, “ma’am, ma’am, please, please do not have this baby on the ground, please, the hospital does not look kindly on these matters.” After the fifth time of him repeating himself, my husband graciously says, “sir, she is in the middle of a contraction, there will be no reasoning with her.” In between contractions, I do manage to sit in the wheelchair for a good fifteen seconds until the next one hits with a vengeance. As I am being wheeled to an ER room, I see several nurses setting up for the arrival of our son, I see a doctor coming down the hall with his gown and mask on in a frantic state. I hear him saying, “OB wants me to check her, I don’t know why I have to check her, we need to get her upstairs stat.” Well, he does proceed to check me about four times and after each check he proclaims, “she’s fully dilated, this baby is coming.” I have several attendants holding my legs and we are breathing through the contractions and pushing. I am nearly stepping outside of my mind, I mean really, what else was there to do in this situation. Right about then, an angel of the Lord appeared unto me in the form of an OB doctor by the name of Dr. Goetjes. She got down to my eye level and with the calmest voice she said, “Sweetie, we will get you upstairs just in time to have this baby.” I asked her if I could have an epidural first and she said, we need to get you upstairs and then we will see. Later I realize that was her kind way of saying, no, there is no time. I barely remember the transport from the ER to the OB floor. I remember not seeing my husband anywhere but seeing my doula, Molly Kehrer right by my side. My husband got caught outside the elevator as the doors were swinging shut. He will have to blog about his own experience here because it is filled with much humor.

The delivery room was dimly lit, peaceful and reassuring. There was one nurse, one doctor, my doula, my husband and soon to be son. I pushed several times and was then told, “he is sunny side up, we need to get him rotated, let’s change positions.” Three pushes in a new position and little buddy had spun himself in the right positioning for birth. A few more pushes and we welcomed Cohen Orion Emersondean Adams into our world. What a sight for sore eyes. What a delight to our hearts. He came out most perfectly and rested quickly on my chest.

A few things I did not mention earlier that I will share now is that I was positive for strep B and because he came so very fast, there was no time to treat me for strep B or for the epidural I had requested. Our prayer and plan all along was that God would cover his little body from strep B and that delivery would move so quickly it would leave me no room to change my plan and opt for every drug known to man. I would like to think I am quite tough but when push comes to shove (no pun intended), I do sometimes wonder.  I will also add, our three babies from Haiti should be home the first of summer. What an adventure it has been believing God each step of the way for their arrival. Angels have made their presence known time and again throughout this journey. I am so very grateful.

Should you ever wonder if there is a God, a supreme being, wonder no more! Surely He is here in this place! 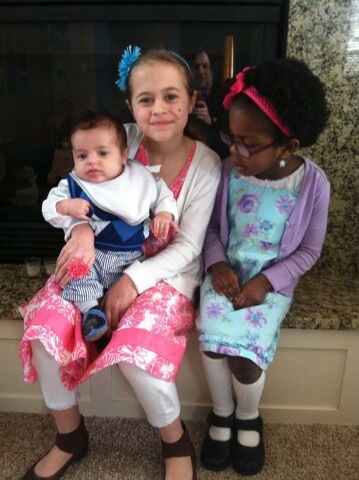