The Day God Made our Sundae! 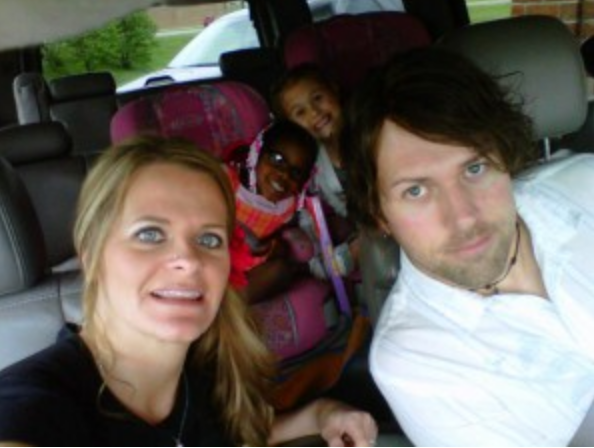 I never really thought this is how my life would go, the wounds, the pain, the scars, the brokenness, the separation, the divorce. Wait a minute, wasn’t I living out my childhood dream? The dream of being married to a Pastor and my love for music blessing the lives of others. On the outside that is exactly how my life appeared. On the inside since the very first night of our honeymoon, I was married to a very angry man. A man so locked up inside his own anger and mistaken identity that he couldn’t love himself, so how could he ever love me? He was convinced a child would make his life better. 3 1/2 years of fertility medications, shots and procedures and still no child. An ovary removed due to tumors. 3 1/2 years of lonliness, bruises, heartache, countless pleas with God to take me in my sleep, 22 and hopeless.  Surely someone had stepped into my life’s story with a chapter from another book. Everything  I thought I knew about a loving, caring Father disrupted by the pain from another human being.  My hope in mankind diminishing, caught in a downward spiral of despair. Toward the end of the 3 1/2 years, God sent an angel, in the form of a Pastor of a large church no less. God had given him a dream. He spoke the words, “if you do not make a change in your life before the end of the year, you will be dead.” He had no idea of my situation other than the word he had spoken that day. It was then, I told him and his wife everything. I left no detail out. God sent them to help me find my way out.

One year after the last page had been turned in that chapter of my life, my path crosses with a very dear friend who I had not spoken with in quite some time. He was a gentle giant, a John the Beloved sort of guy with an incredibly funny side. He at one time was my guitar instructor but with my circumstances, I had to quit lessons to focus on getting better. We had lost touch for a long season. He was living in the town where I was working for a booking agent. Coincidence? I think not. It was the beginning of a new chapter in my story and although very much afraid, I had a deep knowing that this man was different. This man carried a pastors heart without the title of pastor. I could see his brokenness from  previous years of pain but it was layered with such forgiveness. It wasn’t long after our reunion and we were married. A simple wedding with a whole lot of peace and redemption.  Little did I know that this would be the beginning of our life of making music together and so much more that we had never planned. Step by step God was orchestrating our lives. April 2002 I am sitting in a women’s conference with a group of my closest friends. This incredible women named Joyce Meyer stopped in the middle of her sermon and stepped from behind the pulpit. Her speech and demeanor had changed and she spoke the words, “if you have been desiring children for a very long time but the doctors have told you it would never happen, stand up right now.” I shot up like a rocket without even thinking of what she had just said. There was something deep within my being that knew there was a miracle waiting for me and I wasn’t going to sit there and let it pass me by. There were about 150 women standing up that day and she said, “within six months to one year, you will be pregnant and the doctors will be astounded.” I began to weep uncontrollably. I knew I would not be disappointed and that God was moving within me and all around me.

April 2003 Jared and I find out via a blood test that we are expecting our first child. My doctor of 15 years came into the room and if only her face could have been captured by photo that day. It will forever be engrafted in my mind. Tears rolled down her face and she confirmed what we had suspected. Hearing the words, you are pregnant are some of the best words I have ever heard in my life. December 2003 we welcome our first born, Faith Annagail into the world. Not only has she changed our lives in ways only parents can understand, she has brought gifts to our family that we could have never imagined. July 2007 we are a busy family of 3, Faith is 4 and we are knee deep in running a health care recovery business and playing shows on the weekends. Our lives rich in travel and meeting amazing people. It was a sunny day and a phone call came in from one of our dearest life long friends. The voice on the other end was joyful yet filled with concern. In a desperate search to find a family for a little girl she helped bring back from Haiti, she asked would we please come to the hospital to pray over this child. She thought of everyone and knew when asked, we would spring in to action and come. This precious baby girl was barely 2 months old and was brought to the US on medical visa to have a large teratoma tumor removed from her tailbone. Her mother had stopped feeding her because the doctors in Haiti said she wouldn’t live. God sent 2 angels to rescue her. He knew her destiny. A week after, we were asked to come and pray. We received another call. Would we be the temporary respite family to give her after care for no longer than 8 weeks. 8 weeks turned into 3 months, 3 months turned into 6 months and at the one year mark through tears, I told my husband, “I cannot do this anymore all the while knowing she would be removed from our home.” She had become my second child. The child I didn’t carry in my womb but the child I had never stopped praying for, the child I carried in my heart. The anguish and pain we went through on a daily basis, knowing she would soon be removed from our care. Our hearts were being ripped out of our chests at the thought.

Christmas 2008 we were given clearance to begin adoption processing. We had no idea what we were getting ourselves into. The adoption journey will be saved for another blog but suffice to say, we had to daily stay steadfast and secure in knowing He who had begun a good work would be oh so faithful to complete it. Through 6 medical visa renewals, 8 train rides to Chicago, fingerprinting, 3 lost dossiers, numerous trips back and forth to the hospital, 1000 bags of frozen breast milk from another mother, interviews, forms, forms, forms, 3 years and  a lot of money later she became our forever daughter and we her family. She received her new name Gracelynn RoseMichelle Adams. God was making our Sundae and oh how divine it was!

We had never stopped trying for more children but for reasons we couldn’t understand, I was unable to get pregnant again. I even thought maybe if I sit in another Joyce conference, surely then. Faith is now 8 y/o and Gracelynn is 4 y/o. In November we decorated our 4th upstairs bedroom into a nursery in anticipation of our baby boy or girl to come. In December 2011, I got very ill with high fever and cramping. It was at that doctors appointment where we learned we had just lost our baby. I was a little over 8 weeks along. Devastated doesn’t come close to the way we felt. I never thought I could come out of such a dark deep hole of sadness. I knew it was something I had to allow myself to walk through and I knew that nothing was to ever fill the void of my lost child. I walk around daily with her memory around my neck. Daddy named her Amber Eileen, it means God’s soft jewel. Every time I hear, read or say her name, I cry. I know she is with Jesus in Heaven. I know she is not forgotten and I believe deeply I will hold her and kiss her someday. Everything belongs in God’s kingdom. Nothing is lost.

February 2012. A dear friend of ours sends me an email. I read it, I see the photos of the most beautiful little girl from Haiti I have ever seen. I hear the words, she is my gift to you. God was asking us to care for a very wounded little girl. Just like me 13 years ago. There was hope for me, I was broken but not beyond repair.  The circumstances surrounding her are hard to hear about, hard for anyone to hear about. Our daughter has been through a lot of pain at a very young age and we recognize fully she needs healing; spirit, soul and body.  She has the most beautiful eyes, there is pain in those eyes. We know the road ahead is treacherous. We know we will need your prayers over the next several years. We know we will need to lean heavily on our God in every moment. Our daughter is not beyond repair. God prides himself in our redemption through His love. God gave us our daughter Amber for 8 weeks in my womb. He then finds a need for her in Heaven. Barely 8 weeks later, he brings us our new daughter, The number 8 means new beginnings! There is a saying on the wall of the nursery that reads, “IT IS HE WHO CAN!” We are walking out the words, it is He who can! Need I say more.

Author: jennifer
Filed Under: Adoption, Parenting, Recovery
Mom because I love you. A Poume of incurigmint. (A Poem of Encouragement)

3 thoughts on “The Day God Made our Sundae!”